Your Complete Source for Infrared Inspections and Thermal Imaging 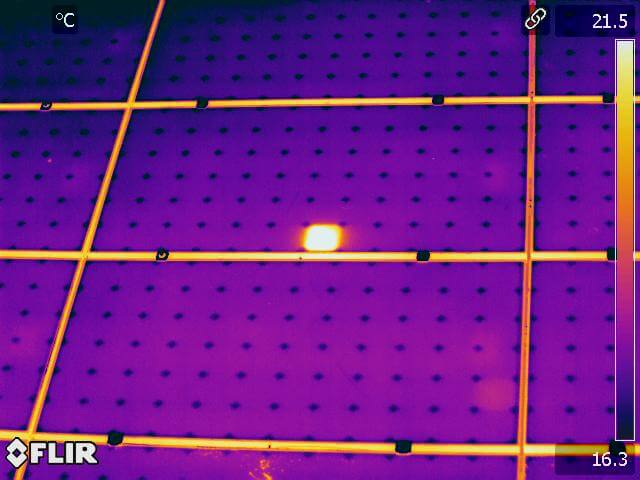 Hot PV Cells Reduce Efficiency and Can Cause Panel Failure

This infrared image from an inspection of a solar PV panel shows a single defective cell, which is overheated. Defective cells like this will reduce the power output of the panel. Bad cells can get hot enough to crack the glass cover allowing moisture in and can melt the solder connections resulting in the failure of the entire panel. Infrared inspection finds defective cells and electrical components so they can be addressed thereby ensuring the efficient operation of the panel and long life of the array. Contact Us or call 845-641-5482 to schedule an inspection.

To achieve the most benefit from your Solar Panel investment, all panels should be producing their rated power output. Defects in Photovoltaic panels (PV panels) will reduce efficiency through reduced voltage and current output. Two issues, which are typically found on solar PV panels, are defective Photovoltaic cells and defective converter boxes. Defective cells may be found individually or as a group, however defective convertor boxes are seen as a single hot spot, not usually fitting within the pattern layout of the individual PV cells on the panel. To better understand the significance of having a single bad PV cell, please read the following section on how solar PV panels operate. 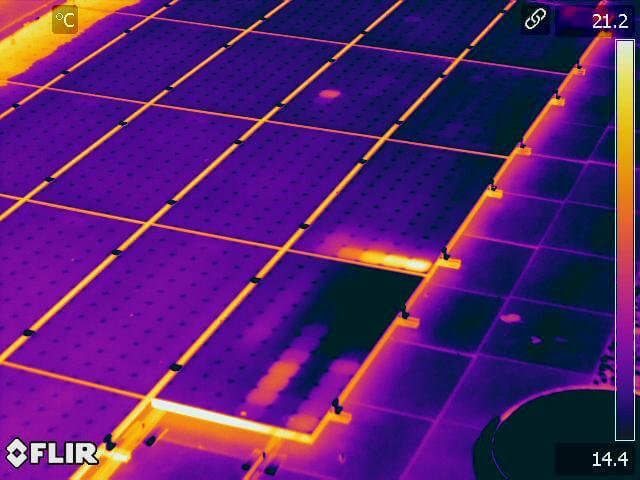 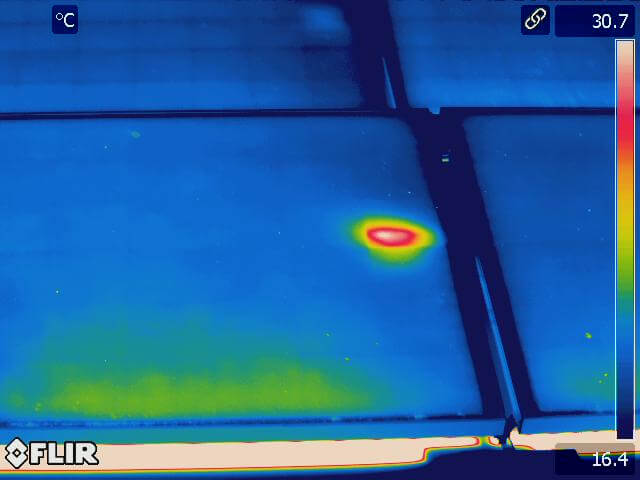 The single hot spot in this thermal image is often associated with a defective converter box.

A photovoltaic solar panel is made up of an array individual solar cells. A typical configuration may contain 36 cells in one panel. Each cell in a panel produces about 1 half of a volt (.5v) and the 36 cells are wired in series strings to produce 18V. This voltage is selected so that when all the voltage losses due to the resistance in electrical connections, voltage drops across blocking diodes and the voltage drop across lengths of interconnecting wiring are taken into account, there is still enough voltage left to generate the approximately 14 volts needed to charge a 12V battery, or to be inverted to 110V AC.

When the sun shines on the panel, the energy in the sun’s photons knocks electrons free from the semiconductor material in each photovoltaic cell creating a flow of electrons, which is the “current” of electrical power. The electrical current flows through each cell, positive to negative and through each of the cells in the string. When a cell in a string is defective, it blocks the current flow and voltage output produced by the good cells which proceed it in the string. If the first cell in the string is defective, not much power is lost. However, if the defective cell is near the end of the string it can block the output of that entire string.

In addition, due to the excessive and highly localized heat created by the hot cell(s), secondary problems such as melted solder connections, cracking of the protective glass cover which allows moisture into the panel and the degradation of adjacent cells in the panel, can be caused by the overheating of a single PV cell.

Infrared inspection of solar panels works so well because the signature of a defective cell is heat, and that’s what thermal imagers are designed to detect. Infrared inspection of PV solar panels should be part of the quality acceptance procedures of any new installation and for the ongoing maintenance of established arrays. To find out more about how Infrared thermal imaging can help you maintain top performance of your solar PV array, please contact us at 845-641-5482

Infrared Imaging Services LLC is a member in good standing of the United Infrared Network. As a member, we receive support for our customers from industry experts with decades of combined experience. We are certified for BlockwallScanIR™, EnergyScanIR™ RoofScanIR™. ElectricIR™, and DataCentIR™. Call or use the Contact us page to discuss your commercial thermal imaging needs. We provide infrared electrical inspections as requested by your insurance company. We are Level III thermographers and infrared instructors certified by the Infraspection Institute.

Have any questions or comments? Please feel free to contact us by reaching out through the form below. We look forward to hearing from you!